10 Things You Didn't Know About Hummingbirds

10 Things You Didn't Know About Hummingbirds

If you live in the America’s, it’s likely that you have seen one of the smallest bird species in existence: the hummingbird. Often you’ll catch a glimpse of them buzzing around gardens, fields full of blooms, or your local hummingbird feeder. These tiny pollinators are fairly well-known, but also incredibly elusive and there is a wealth of knowledge about hummingbirds that is yet to be discovered by most. To start, we have compiled a list of 10 things you didn’t know about hummingbirds.

They are simply called hummingbirds because when you are near them, they make a humming sound. This sound is an ambient buzz in the air comparable to what bees sound like. Hummingbirds can make this noise by the speed and direction that their wings flap in. Air passes through their feathers while they are beating their wings, creating this noise. Some species can beat their wings faster than others. The most common hummingbird to the Hampton Roads area is the Ruby-Throated hummingbird. According to National Geographic, these birds beat their wings 53 times per second.

If you know anything at all about hummingbirds, it is probably that they eat nectar from flowers. These birds need to consume twice their body weight a day in nectar to keep thriving. Hummingbirds weigh about the same as a piece of printer paper, so that doesn’t sound like very much to eat. However, to keep up with their supercharged metabolism, they need to visit about 1,000 - 2,000 flowers per day (according to audubon.org).

The best hummingbird flowers are tubular and/or brightly colored such as bee balm, lantana, salvia, butterfly bush, honeysuckle, and coneflowers. For your hummingbird feeders, wildflower-infused nectar from Sweet-Seed is our top choice of hummingbird nectar. For feeding, give the hummingbirds in your area everything they need with the Humm-Yumm Hummingbird feeder.

As annual migratory birds, hummingbirds usually travel from a warmer, southern climate to cooler, northern climates in the spring and summer mating season. When preparing for migration, hummingbirds will eat insects as well as nectar to have enough energy for the journey. Like sea turtles and their nesting grounds, hummingbirds follow a similar pattern traveling around 20 miles every day.

Hummingbirds have long needle-like bills to get deep into a flower to drink the nectar. The beak is mostly a tool to get into the flower, but their tongue is the device that grabs the nectar. Hummingbirds have very strange, long tongues that are tube-like. The hummingbird depresses these tube openings when reaching into the flower. When the nectar is detected, the bird opens the tubes to pull the nectar in like a syringe. Their tongues also have split ends to grab more nectar in those hard-to-reach places.

When hummingbirds have had a long day of eating nectar from their 2,000 flowers, they need to have a nap. Unlike resting, “torpor” is the deep sleep that hummingbirds use to spend the least amount of energy as possible. Their body temps can drop dramatically, almost 40 degrees below their regular body temperature. Commonly when in torpor, their feet lock up so they won't fall from the branch or feeder that they are on. Oftentimes you’ll see them hanging upside down like a bat when in torpor. 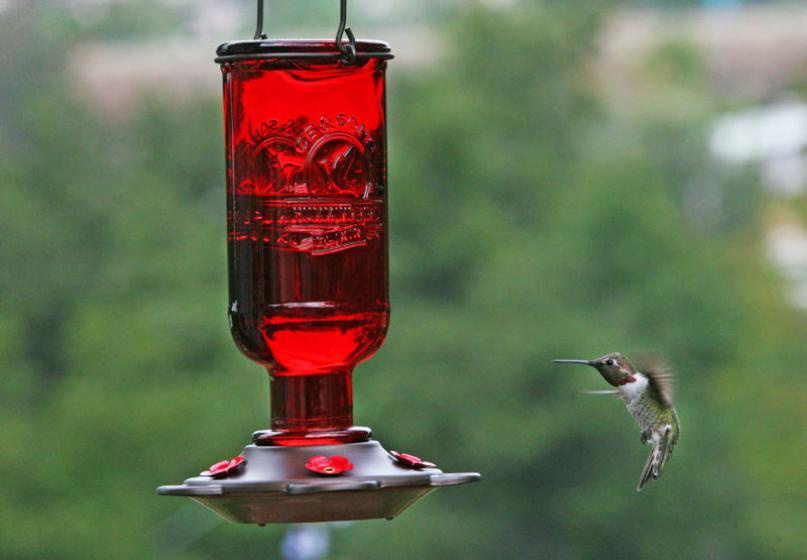 Hummingbird Drinking from a Feeder 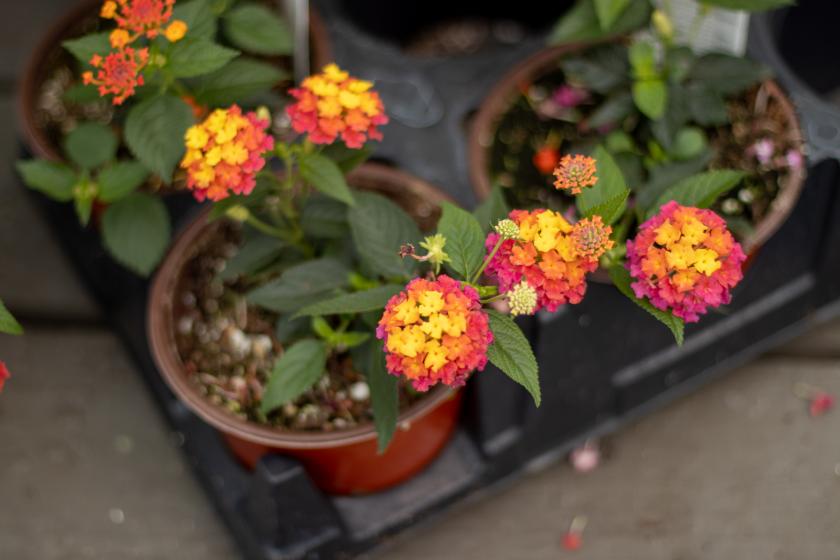 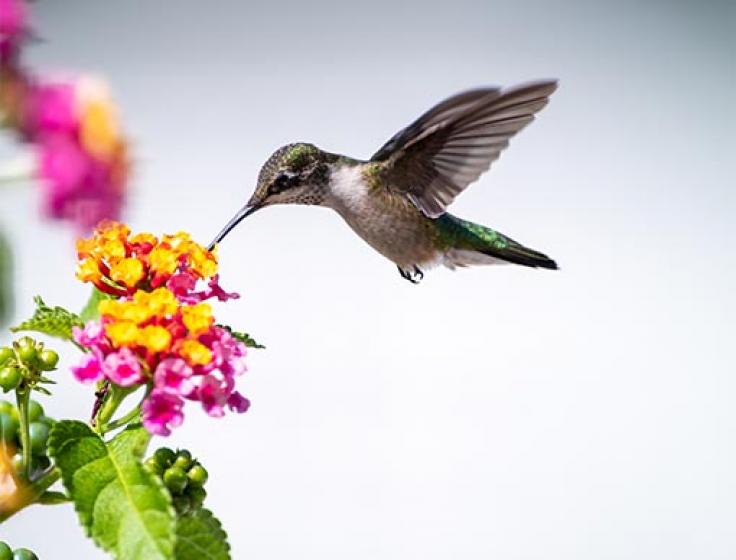 Hummingbird Drinking from a Lantana Flower

When in mating season, male hummingbirds like to show off their reflective, iridescent plumage of feathers around their throats while flying about, usually creating a sort of air show for the female of interest. Some shows of plumage are very dramatic. Male hummingbirds will fly as high as they can and then dive in an arched shape to the female waiting on top of a tree canopy below. Some males can reach up to 50mph during this dive. Once he feels it’s time, he will “hit the breaks” with his tail feathers which will make a sound. The louder, the better. Each hummingbird species has their own sound as each tail feather shape is slightly different.

Once the mating season has passed, the female hummingbirds will start preparing their nests to lay their teenie tiny eggs. Hummingbird nests are very soft and are built to stretch with time as the chicks grow. Hummingbirds will often steal silk from spider webs to make the nest soft and stretchy as well as mosses, leaves, and straw.

Hummingbirds are very accustomed to their routine and the flowers that they like to go to often. Sometimes they will even fight other hummingbirds over their favorite flower paths and feeders. This is why planting a diverse garden is important. Hummingbirds are vital pollinators and planting pollinator-friendly plants attract a variety of birds, bees, beneficial bugs and some pollinating mammals such as bats as well. Pollinators are not only vital to the production of healthy crops for food, fibers, edible oils, and medicines but also are essential components of habitats and ecosystems that many wild animals rely on for food and shelter.

Some pollinator favorites for Hampton Roads include:

Hummingbirds love color. Since they do not have a great sense of smell, color is the way that we can attract them to our gardens and feeders. We recommend using several feeders around your garden to attract more hummingbirds and avoid competition for nectar. Pair your feeders with brightly-colored flowers and garden décor. Once they’re drawn to your yard, hummingbirds will need an abundance of food. Make them a backyard buffet by hanging plenty of feeders, planting lots of pollinator-attracting plants, providing them with a water source, and giving them a place to rest.